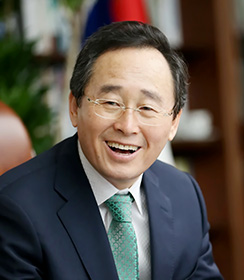 Welcome and thank you for visiting the website of Governors Association of Korea.

Established in 1999, Governors Association of Korea consists of mayors and governors of the 17 metropolitan cities and provinces and is committed to creating a livable country for all citizens and revitalize local governments by promoting healthy local governments through decentralization.

Although the local autonomy system of the Republic of Korea has been enforced 23 years ago, we still find ourselves in a central government-driven society.

The autonomy of local governments will meet various administrative demands of the people, and develop a mature local autonomy system which is based on diversity and creativity.

We look forward to your continued support and cooperation.