Submission of Proposals on Policies to the Government 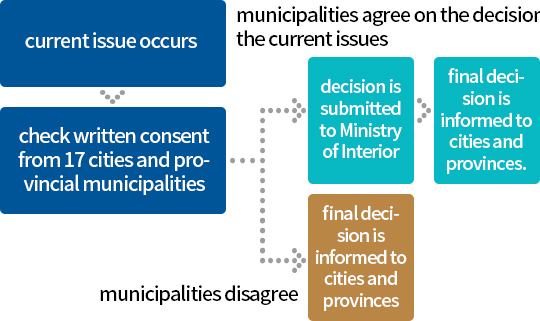 To create logics and develop ideas to respond to the Central Government policies and to find ways to develop the system of decentralized power.
To provide feasible policies and countermeasures through raising awareness and efficiently managing decentralizing power

Cooperation with relevant organizations and groups

To further build solidarity among cities, local municipalities, and the assembly, these series of activities will allow them to work together for dealing with various tasks and collectively respond to common issues and also allow relevant authorities including the Government, National Assembly, academic fields, civic groups to proceed with discussions on policies for raising awareness of national local policies, strengthening decentralizing and cooperative systems.